How to Draw Baymax – free printable

An all new “Baymax!” show featuring everyone’s most loveable robot is coming to Disney+.  Today we are sharing a fun ‘how to draw Baymax’ step by step printable.  This is a free resource for teachers and families.  This activity sheet is high resolution and licensed to share from our friends at Disney. Enjoy the simple steps to draw just like the animators at Disney!

In celebration of National Streaming Day, Disney+ has released a new trailer and key art for Walt Disney Animation Studios’ “Baymax!” Streaming exclusively on Disney+ on June 29, the all-new series of healthcare capers returns to the fantastical city of San Fransokyo where the affable, inflatable, inimitable healthcare companion robot, Baymax, sets out to do what he was programmed to do: help others. “I thought it would be fun to do a Disney+ series with Baymax interacting with normal folks,” said series creator Don Hall, who helmed 2014’s Oscar®-winning film “Big Hero 6.” “In each of our six episodes, Baymax just wants to help someone—and a lot of times they don’t want to be helped. He sets out to fix a physical issue that he’s identified, and in the process, gets to a deeper, more emotional place and can be almost transformative in that role.”

Walt Disney Animation Studios’ “Baymax!” returns to the fantastical city of San Fransokyo where the affable, inflatable, inimitable healthcare companion robot, Baymax (voice of Scott Adsit), sets out to do what he was programmed to do: help others. The series of healthcare capers introduces extraordinary characters who need Baymax’s signature approach to healing in more ways than they realize. Created by Don Hall, who helmed 2014’s Oscar®-winning film “Big Hero 6,” “Baymax!” streams exclusively on Disney+ starting June 29, 2022. © 2022 Disney. All Rights Reserved.

OK – who else is just head over heels gaga for Baymax?  Our kids LOVE Baymax so much. OK, our whole family loves him. Baymax is so cute and loveable.  How is it that a robot has captured the hearts of so many? (Duh – he’s a big marshmallow!)

As I have said before our kids love drawing and they of course love Disney! A few months ago I learned how to draw Baymax from the one and only Jin Kim while at Walt Disney Animation Studios – I know, it was crazy.  I am sorry I couldn’t take you all to the studio but  I am excited to share another FREE Disney printable with you – this time it is a “How to Draw Baymax” step by step printable.  As always, you can click and simply print this from your home printer – there is no need for you to sign up for anything or give any information (although I sure would love for you to subscribe to my blog it is completely unnecessary to take advantage of these freebies!) – just click and print away!  We love to bust out these FREE Big Hero 6 printable activities for when we have a rainy day (which is like never, we are in SoCal, but like some days it does get really hot or dips below 65 so we obviously can’t go out in weather like that) or even as FREE activities for our upcoming Big Hero 6 birthday party!  If you like this How to Draw Baymax Printable make sure you check out ‘How to Draw Hiro Hamada” and ‘FREE Big Hero 6 coloring pages‘ too!  Enjoy!

HOW TO DRAW BAYMAX STEP BY STEP 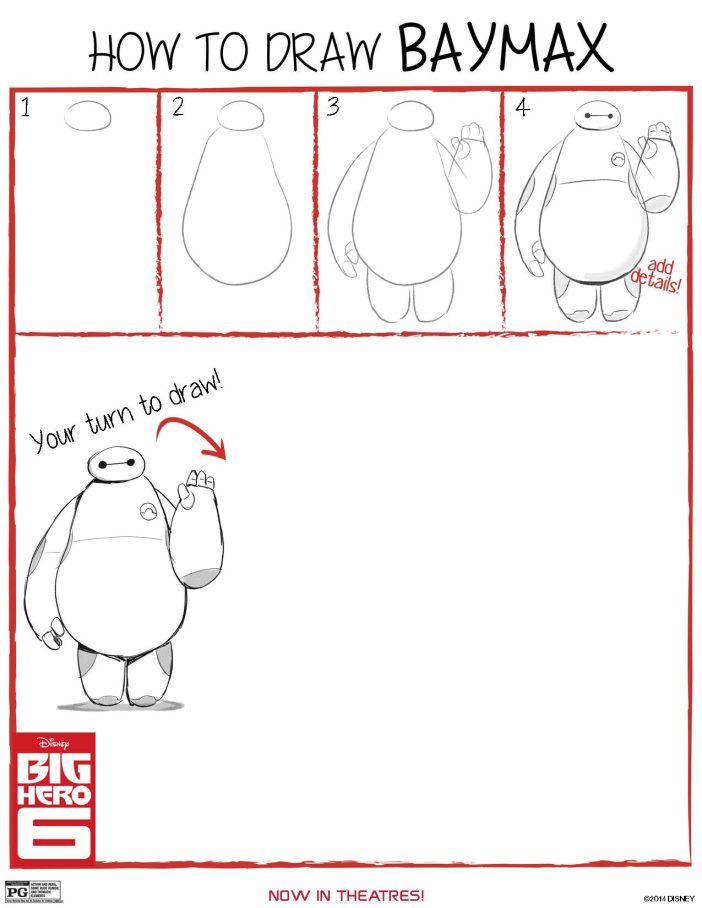