Meryl Streep, Christine Baranski, & Tracey Ullman share about parenting and Into the Woods! 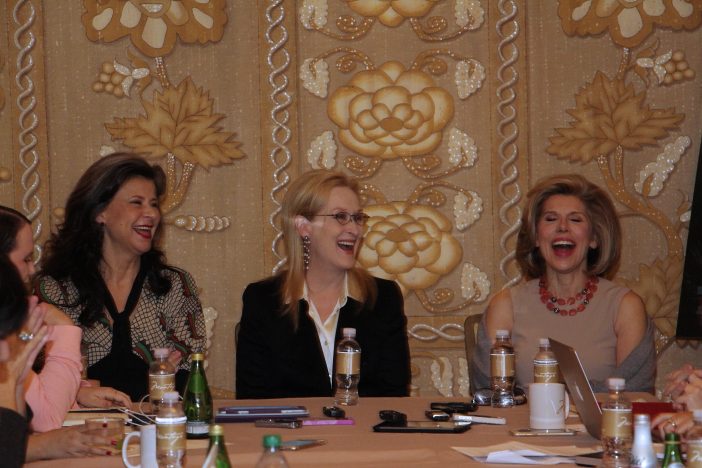 Into The Woods opens in theaters on Christmas Day and just this past week past week Meryl Streep, Christine Baranski, and Tracey Ullman were kind enough to sit down for an interview with myself and 2o some other family bloggers from around the country.  We had screened the film just the night before at the historic Samuel Goldwyn Theater and we were all so excited and a bit nervous!  These three women are icons and I think it is safe to say that even the most seasoned entertainment writers in the room were a little star struck. 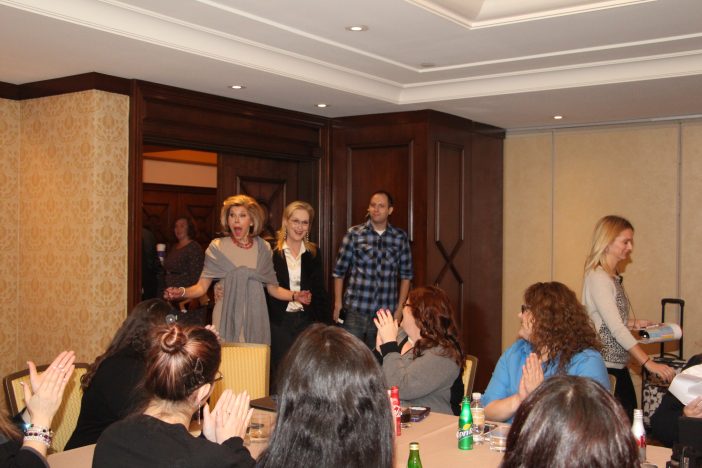 So much of that nervousness melted away the moment they walked in the room.  We clapped and I kid you not, they cheered.  They sat down and thanked us for being there.  Members of our group asked questions about the movie, about their friendship, advice on parenting, and basically anything else that came to mind.  I wanted to share a few of my favorite moments……….

One blogger pointed out how it is so obvious these three are such good friends and asked if they could share how they met….

Meryl Streep said of her friendship with Tracey  that they met when they were 31 and 21 on the movie sent of “Plenty”” She said “And I thought I’d just met my new best friend…” and as conversations with old friends tend to do it went onto all kinds of tangents.  Tangents involving breaking down in the middle of a desert, plane trouble, one hit wonders, and lots of laughs. 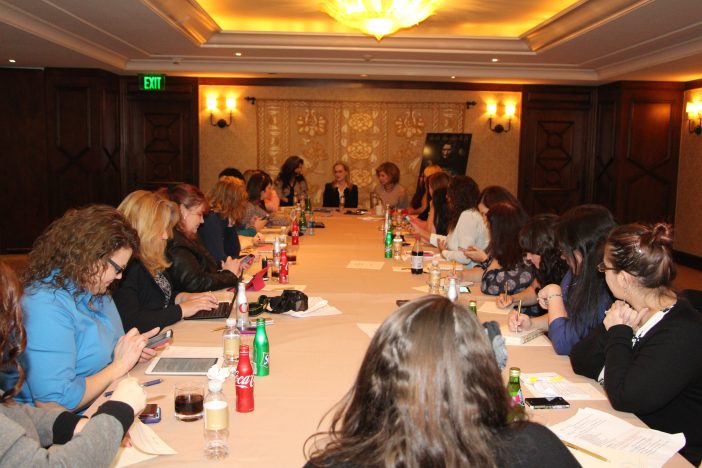 Meryl and Christine met on the set of Mama Mia and they have known each other “a hundred years” according to Meryl.

And while talking about having similar interests, living in the same State, having kids the same age, and other parallels Christine said something that I found so admirable and sacred …. “….it’s a trick, being an actress, a wife, and mother,  and having that longevity.  That’s the real achievement in my opinion.  That’s the greatest achievement, not just in career, but holding your life together…” 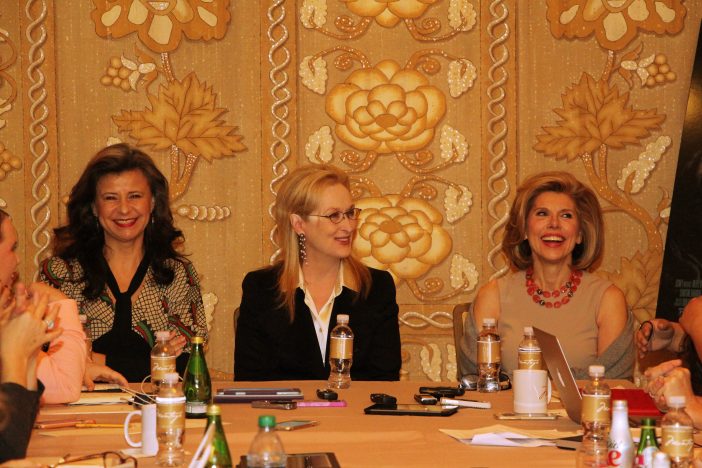 and then Meryl made it even more sacred by saying “It’s a tribute to our husbands.” 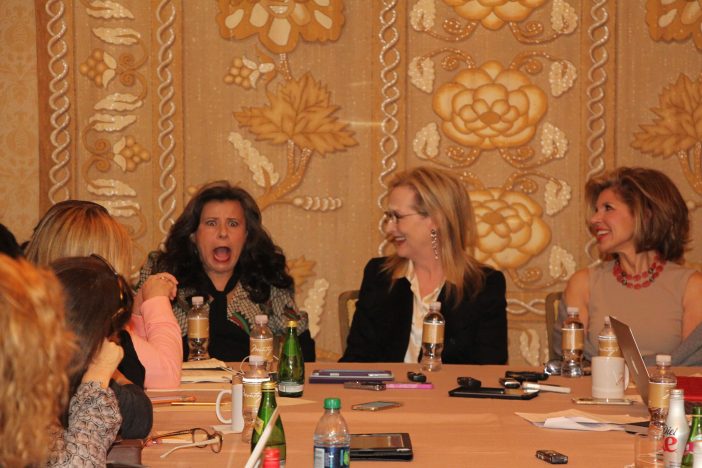 *side note* this picture is everything.
***

Another blogger asked  if these working moms with older kids had any advice to share with newer mothers.  Oh the wisdom flowed….. 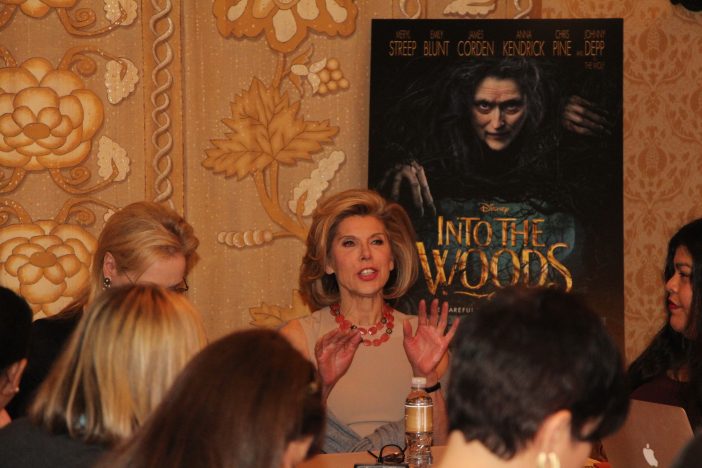 Meryl answered first and the others echoed that living in a digital world now seems so much more difficult to raise children.  There are too many gadgets and devices that expose kids to potentially scary things now.  I agree 100% and while it scares me personally quite a bit raising kids in a digital world, it felt validating to hear Meryl Streep, Christine Baranski, and Tracy Ullman validate those concerns. 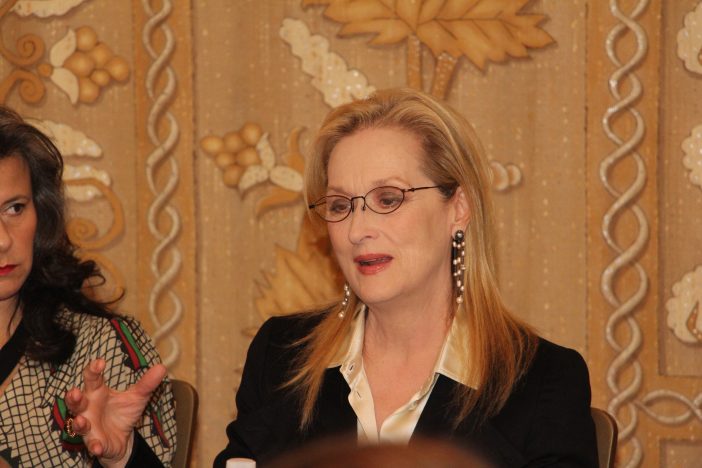 I know we all have different opinions, many of our friend’s kids have cell phones, unlocked iPads, computers in their rooms and we just don’t. I have been accused of being too sheltering, that I can’t raise kids to be Amish in the middle of a modern world. I’ve been told kids are going to see what they are going to see and I can’t stop it from happening eventually.  I know there will come a time where I can’t babysit every single thing my kids do on the web, I know there will come a time where they see something inappropriate on the internet or in a text.  I know that.  My hope is delaying all of that as long as possible will be helpful, maybe.  Anyway, enough about my thoughts, that is not why you are reading, let me tell you what Meryl, Christine, and Tracey had to say!

Meryl said “I feel like so much has changed.  Raising little kids now is so different from when our children were little kids……and I think that’s part of why this film and its warnings and its, you know, overweening care of the mothers and — it speaks to this time when children are, it’s harder and harder to keep the world out……To keep them in the little tower’s impossible.  And all of the bad stuff comes in, and people worried about this film, that it maybe is too dark for kids.  Kids know so much now.  And they’re aware of so much, and yet they’re so resilient, and innately hopeful.” 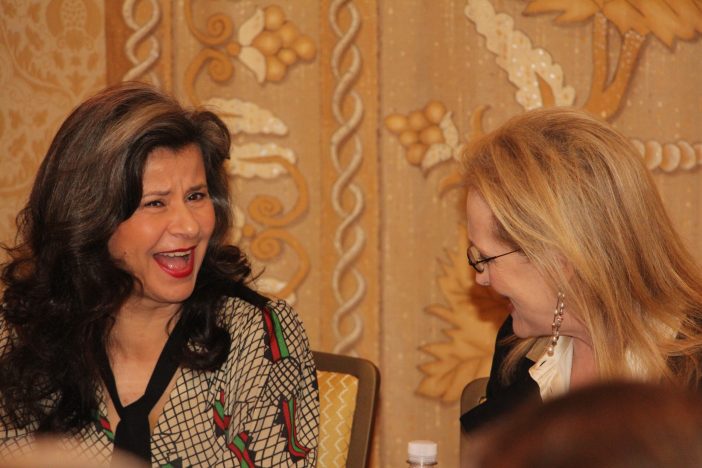 Tracey Ulman asked her friends if they would have taken their children as little as six or seven to see the movie and they all went back and forth about what age might be appropriate.

Christine Baranski said she thought seven or eight might be an appropriate age, but maybe not, that “Visuals can really affect…… be careful what you give them visually.”  She went on to share stories (they all did) about things they saw at about my big kid’s ages that really imprinted on them.  I just felt so encouraged to hear these mothers who have worked in the movie industry for so long remind us to be careful what we expose our children to.

It is all about balance though, and we can’t keep them locked in a tower forever, oh there are days I wish I could…… *creepy visual of Kate singing “Stay with me” here*  Christine said ” I was always telling my kids, as I read to them, that there was such a thing as the world of the imagination.  I said, “You’re safe.  If you’re in the world of the imagination, you can go anywhere, and you all come back from that, so you’re safe. We will read this book, and it’ll take you places, but don’t worry.  You will — you will come back.  There is that world.”  And movies are like that.  Movies should go there, but, remember that you can come back.  You don’t transfer.” 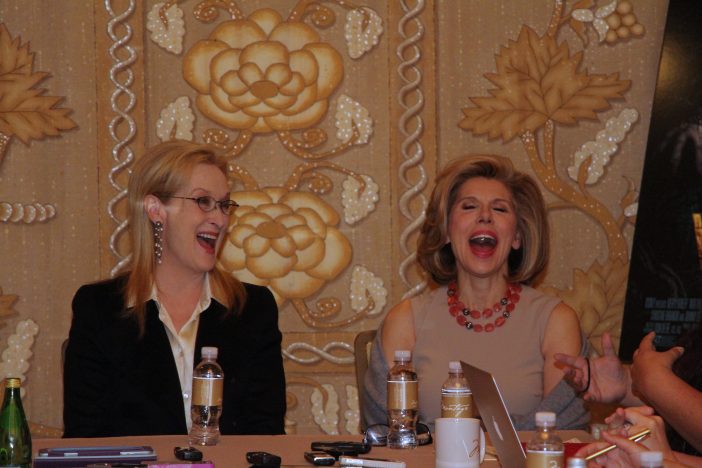 Tracey Ullman stated she thinks it is even harder with boys because they have the “Weapon gene”.  While I am sure there are many who disagree that boys and girls are different I would tend to agree with Tracey.  While I know there are exceptions, my mom worked very hard at making her house a ‘no weapons’ house and my brother chewed his toast into a gun and shot her anyway. My son did the same.

They basically spoke of balance and being present in this very accessible world. They spoke of working against using phones, tablets, etc as a way to check out.  Technology isn’t all bad, but we need to make sure we don’t miss connections especially when our kids are little.  Wise words from three amazing women I never thought I would ever have the honor of spending some time with.

I plan on taking their advice and letting our kids enter the imaginary world of Into the Woods in the right time.  I loved this movie, but I do want to protect their little psyches and I love that they voiced that concern to us parents of little ones.  I can’t wait to show it to them when they know for sure that it is all make believe and it is something they fully understand they come back from. 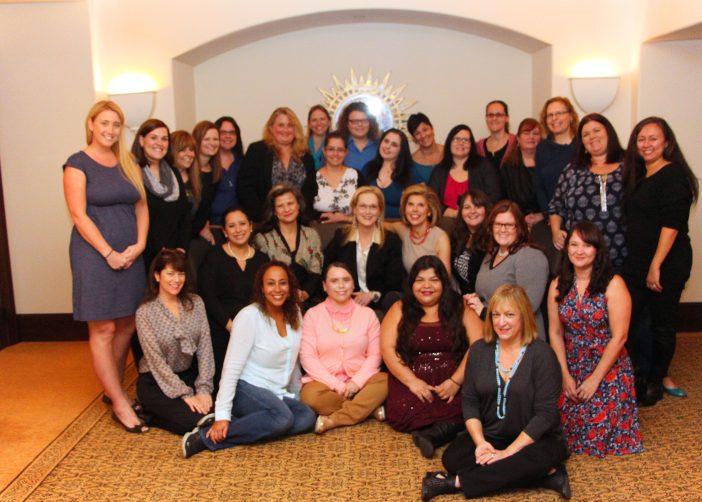 Thank you so much Tracey, Christine, and Meryl for taking the time to chat with us.  Let’s all get together for coffee again real soon!

Until Next Time ~ Kate
Categories:  Disney, Disney Movies, Entertainment
More posts like this...