Disclosure: Highlights Along the Way is a participant in the Amazon Services LLC Associates Program, an affiliate advertising program designed to provide a means for sites to earn advertising fees by advertising and linking to amazon.com. Thank you to Disney for inviting our family to a virtual screening on Raya and the Last Dragon and for sending us toys to preview! All opinions are our own.
Share
Tweet
Pin309
309 Shares 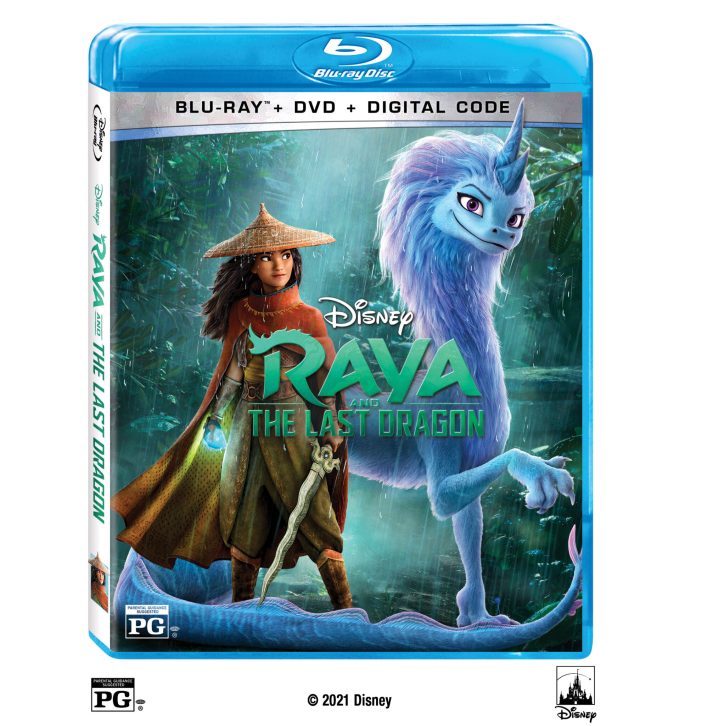 One of my favorite things to do with my family is go to the theaters to see animated films on the big screen. Our whole family loves animation and we truly hoped Raya and the Last Dragon by Disney may be the first film we would see back in theaters. While some places may have movie theaters open, we are in California and will still be waiting a bit. Thankfully, Disney has given movie lovers the option of streaming on Disney+. 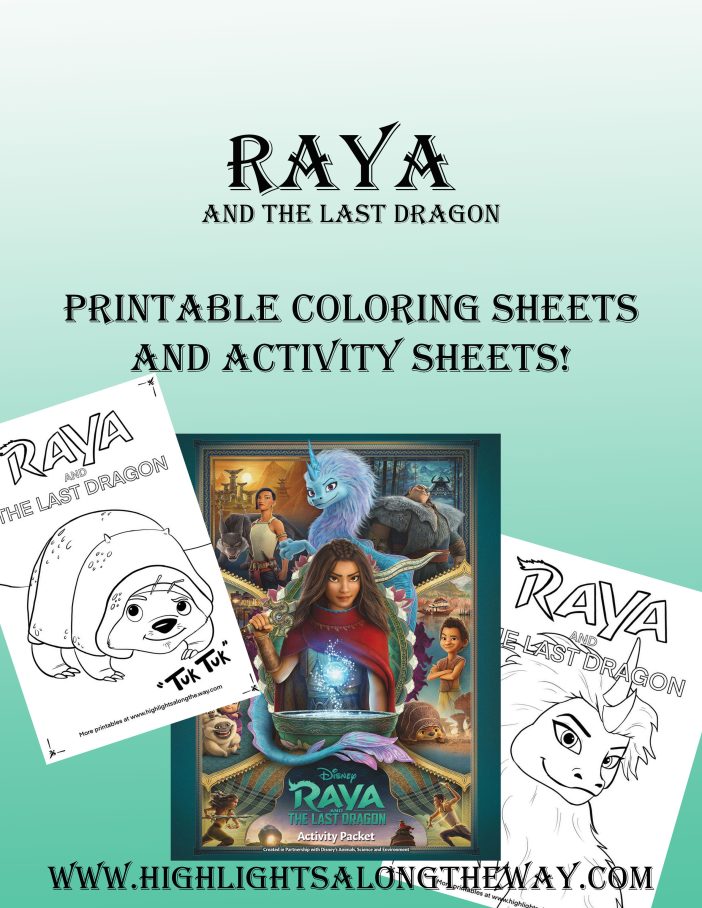 If you enjoy Raya and the Last Dragon you will LOVE Luca! Luca Coloring Pages were just added to our blog!

Is Raya and the Last Dragon Too Scary for Kids?

One of the first questions we get about new family movies is how safe they are for kids.  As our kids get older, we still keep our readers with very young kids in mind when viewing a new film. Raya and the Last Dragon is rated PG, and I think that is a fair rating.  While there is mild violence and even death; it is not bloody, gory, or gratuitous. While I always encourage parents of very little children to read other reviews or even previewing the movie on their own first; I personally thought this film was great for all ages.

As a mom to a little girl who is not even the tiniest bit into flowing princess dresses, handsome princes sweeping them off their feet, or really anything dainty; Raya and the Last Dragon was her jam. That same little girl has been described as ‘a little quirky’ by more than one person over her little life. Because of that, the dragon Sisu is who she identifies most with in the universe.  She loved the bravery shown by Raya.  She loved that the costumes were not (her words) ‘swishy’ or ‘fluffy’. She wants Namaari’s weapons and her haircut. She would like a Tuktuk and she would like it yesterday, please. Two enthusiastic thumbs up.

As a mom raising two teenagers (Lord, help me); I also loved the message of Raya and the Last Dragon.  Without spoilers; this movie presents second chances and the audacious hope that if given the safety to do so; people will do the right thing. I think we can all agree that with everything going on in the world right now, things are volatile.  So much ‘us vs. them’ has made difficult situations even more polarizing.  I am not sure how a movie that began production years ago could be exactly what audiences needed today; but it is a relatable and much needed message for this moment in history.

These themed LEGO sets were released just in time for the movie to hit theaters and Disney+. You can purchase them on ShopDisney.com, your local Disney Store, Amazon, LEGO.com or anywhere LEGO sets are sold!

These Raya Coloring Pages are only inspired by Disney and drawn by me. I will add in licensed Raya printables from Disney whenever they are available! For now, Click and print the adorable Tuk-tuk coloring page and Sisu the Dragon coloring page below. 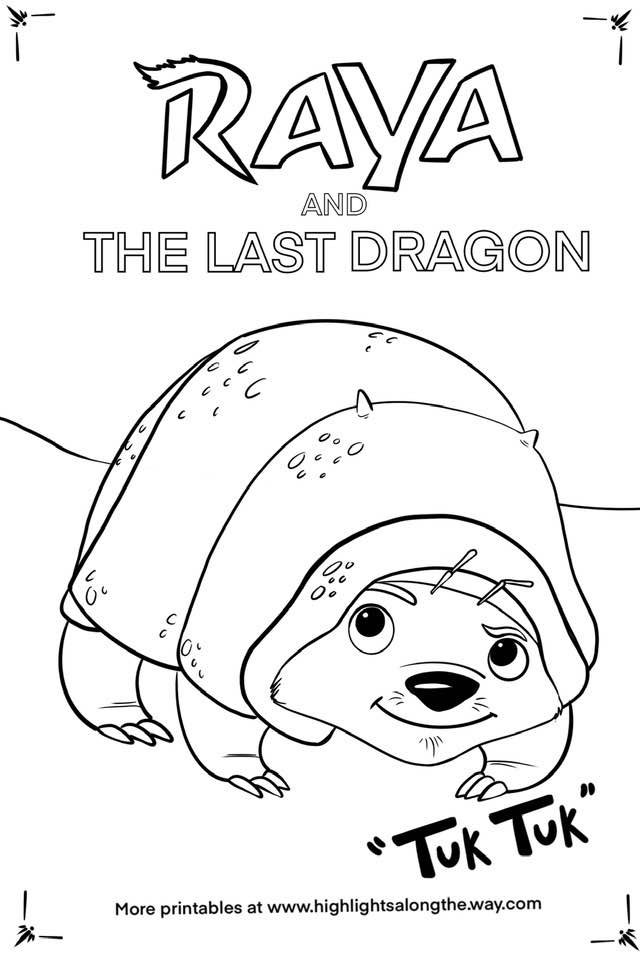 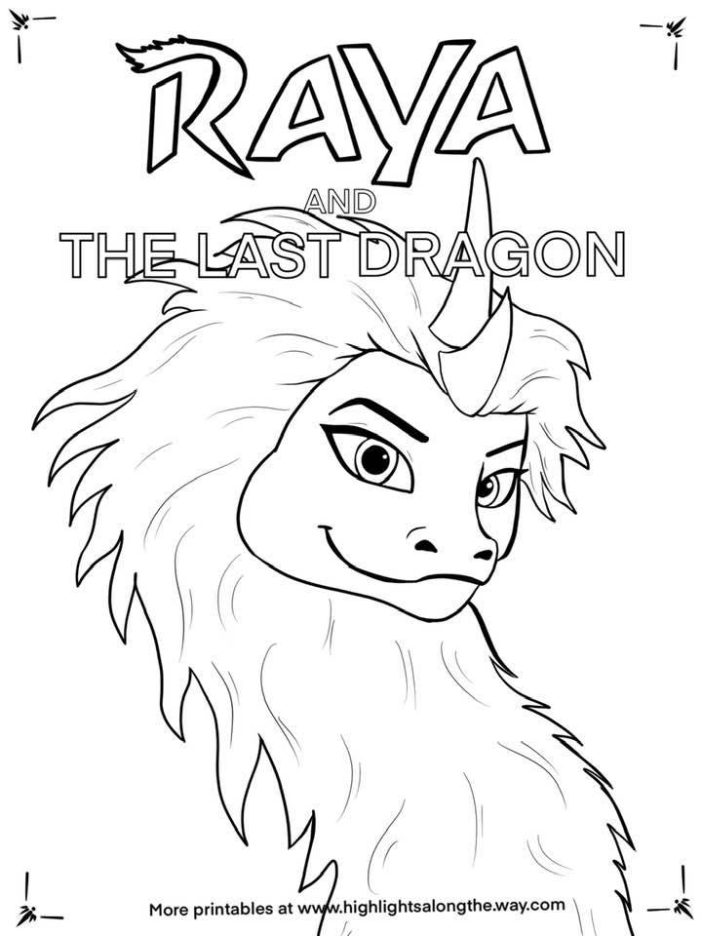 Official Trailer for Disney’s Raya and the Last Dragon

Long ago, in the fantasy world of Kumandra, humans and dragons lived together in harmony. But when sinister monsters known as the Druun threatened the land, the dragons sacrificed themselves to save humanity. Now, 500 years later, those same monsters have returned and it’s up to a lone warrior, Raya, to track down the last dragon in order to finally stop the Druun for good. However, along her journey, she’ll learn that it’ll take more than dragon magic to save the world—it’s going to take trust as well. From directors Don Hall and Carlos López Estrada, co-directors Paul Briggs and John Ripa, producers Osnat Shurer and Peter Del Vecho, and featuring the voices of Kelly Marie Tran as Raya and Awkwafina as Sisu.

RAYA AND THE LAST DRAGON
Walt Disney Animation Studios’ “Raya and the Last Dragon’’ will be available on Disney+ with Premier Access in most Disney+ markets, at the same time as it is released in select theaters on March 5, 2021.

“Raya and the Last Dragon” takes us on an exciting, epic journey to the fantasy world of Kumandra, where humans and dragons lived together long ago in harmony. But when an evil force threatened the land, the dragons sacrificed themselves to save humanity. Now, 500 years later, that same evil has returned and it’s up to a lone warrior, Raya, to track down the legendary last dragon to restore the fractured land and its divided people. However, along her journey, she’ll learn that it’ll take more than a dragon to save the world—it’s going to take trust and teamwork as well.

Raya: Bringing it Home –When the global pandemic of 2020 hit, production of Raya and the Last Dragonmoved to the houses of over 450 people. We open a window into their lives and learn how they overcame massive obstacles to make an animated feature from home

.•Martial Artists –You’ll get a kick out of learning about the martial art forms and weapons used in the film as co-screenwriterQui Nguyen and visual anthropologist Dr. S. Steve Arounsack share the inspiration behind the film’s action-packed elements.

•We are Kumandra –Meet members of the Southeast Asia Story Trust and discover the cultural influences that inspired the film…and how important this representation in a Disney animated film is to the people of the region.

•Outtakes –Step into the homes and behind the mics ofthe cast of Raya and the Last Dragonas they experience voice-over sessions in closets and shaky internet connections, which made recording this film unlike any other

.•Fun Facts & Easter Eggs –Take a look at some of the hidden surprises and behind-the-scenes secrets of Raya and the Last Dragon.•The Story Behind the Storyboard with John Ripa –Co-Director John Ripa invites you to get an inside look at his thought process as he pitches a storyboard sequence from the film and talks about his amazing career with Disney Animation.

HOW TO ENTER our Raya and the Last Dragon Giveaway

Would you like to win a digital copy of Disney’s Raya and the Last Dragon? This is a quick giveaway. We will have TWO winners at the end of this week!  Simply leave a comment below letting us know who you would like to watch Soul with.  Entries will close on May 22, 2021. Two winners will be chosen on May 23, 2021.  Two winners will have digital codes emailed directly to them.  Because this is a digital giveaway, entries can be made from anywhere in the world! Void where prohibited.  Best of luck to all! UPDATE – Two winners have been chosen. We will have more giveaways in the future.

Entry one – Simply leave a comment saying who you want to win (this is just for fun, winner is chosen at random).

Bonus Entry – Pin our Raya and the Last Dragon printables and let us know you did this in a separate comment.

Until Next Time ~ Kate
Categories:  Disney, Disney Movies, printables
More posts like this...