On the set of Speechless

Speechless is my absolute favorite show on ABC.  Two weeks ago I spent some time on the Speechless set and spoke with some of the actors and producers.  I am excited to share the highlights of our interview with Scott Silveri who created the show and also pictures from behind the scenes. 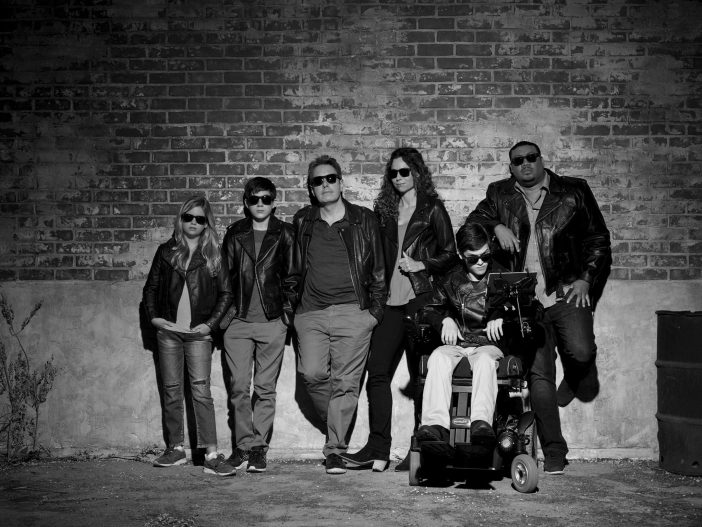 Speechless is a show about a regular family.  Two parents and three kids, one who happens to have cerebral palsy.  Much of the story focuses on the trials and triumphs of a family with a disabled child.  Parents with kids with disabilities, and adults who grew up with disabilities are saying the producers and writers have nailed it.  Speechless is a comedy first, but hits so many points that just don’t come up in typical family comedies.  It is a show that makes audiences laugh and also teaches at the same time, it is brilliant. 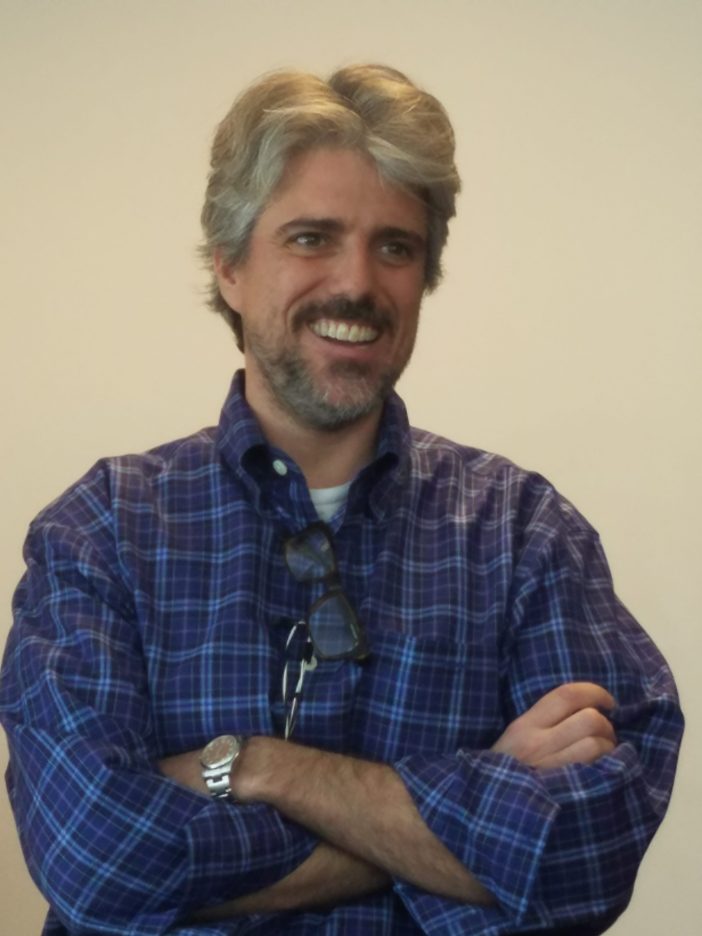 Scott Silveri shares with us that he created the show based on personal experience. Scott has a brother with disability and the show is made up of some of his experiences. While this is not a story based on his family specifically, these are ‘broadly drawn characters’. The story is “really a love letter to my Mom and Dad.”

He shares his family is really supportive and that he first asked permission to create the show. “This is not their story, this is not my story, or my brother’s story. What’s important to me is to capture a couple of elements about our time we had growing up…..Choice is very important in how you live your life. You can take whatever challenges are thrown your way and you can let it define you or have it make you a more fun and interesting person. You can curse the heavens or you can band together and make it work. That’s what my mom and dad did, and I wanted to celebrate that.”

He said his family was happy to see a family like theirs on TV.  He shared that families with disabilities often feel ‘invisible’.

“People either stare or ignore.”  Heart breaking. True. He encourages readers to recognize that there is a lot in between those two standard responses.

I personally asked a question based on an ongoing conversation I have been having with a friend who is disabled, raising disabled children, and works in the area of Disability rights.  My question meandered a bit but I basically asked what he thought about how the disabled community viewed this show before it aired and how it has been widely accepted and praise since it has aired within the community.

“The reception that we have gotten from this community has blown my mind. I was prepared for the fear. Because that is how I feel I would watch it “Like what cynical bs is this gonna be?”.”

He shared that he understand that “There are so many ways to get the show wrong.” As someone who feels this stuff very personally, he said he would have had that hesitation as well.

He shares that they are doing their homework.  They have research teams, they are talking to parents and kids with disabilities. They have partners in the Cerebral Palsy Foundation. The responsibility of representing a community of people that are not often represented in media is not lost on Scott.  He made it clear that it was really important to get it right.

I honestly feel like I could have listened to what goes into this show for hours.  If you are not watching Speechless yet, I hope that this post encourages you to give it a try!

The set is completely different than any other set I have had the privilege taking a peek at.  If you know the story, you know the DiMeo family house is in a bit of disarray.  Often times TV sets are picture perfect, but Speechless is the absolute opposite. 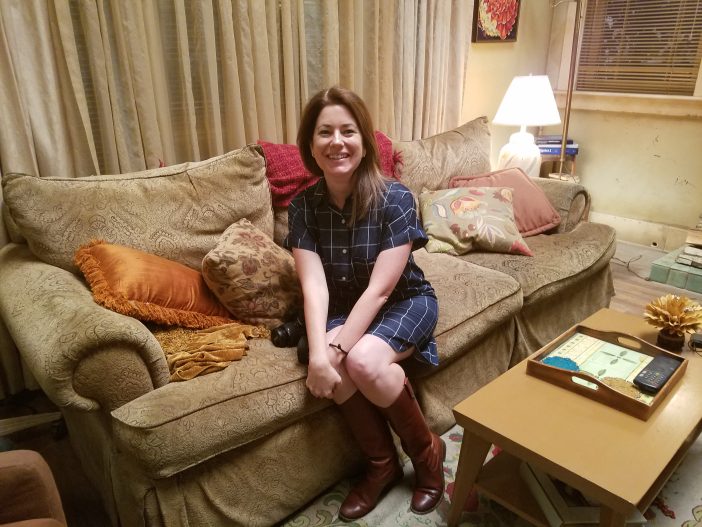 The DiMeo family is exhausted, they don’t have time to tidy up.  You’ll see that they have lots of nick nacks and clutter everywhere. 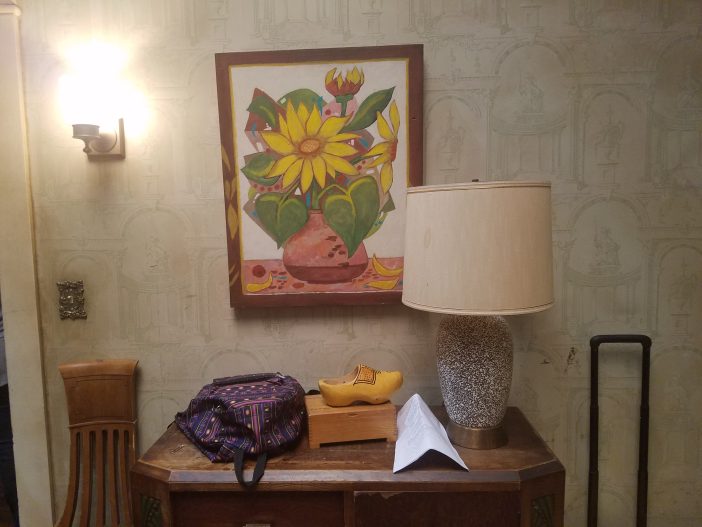 So many families can relate to this family.  They work hard but don’t have a lot of money. They want to give everything they can to their kids even if it means a lot of other things have to be cut out of the budget.  Even if circumstances are different, I think just about every parent would choose the best mobility money could buy for their child before fancy furniture or up to date electronics. 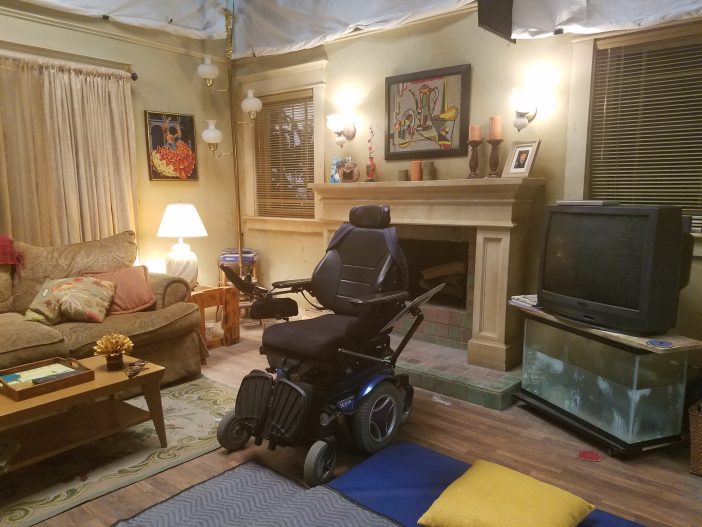 You can really see that so much effort went into making this set look authentic and true to the family.  I love looking at the tiny details you might miss when you are watching on TV.  The out of date refrigerator has crumpled coupons taped to them.  When you think about Minnie Driver’s character Maya, she would 100% do just that. 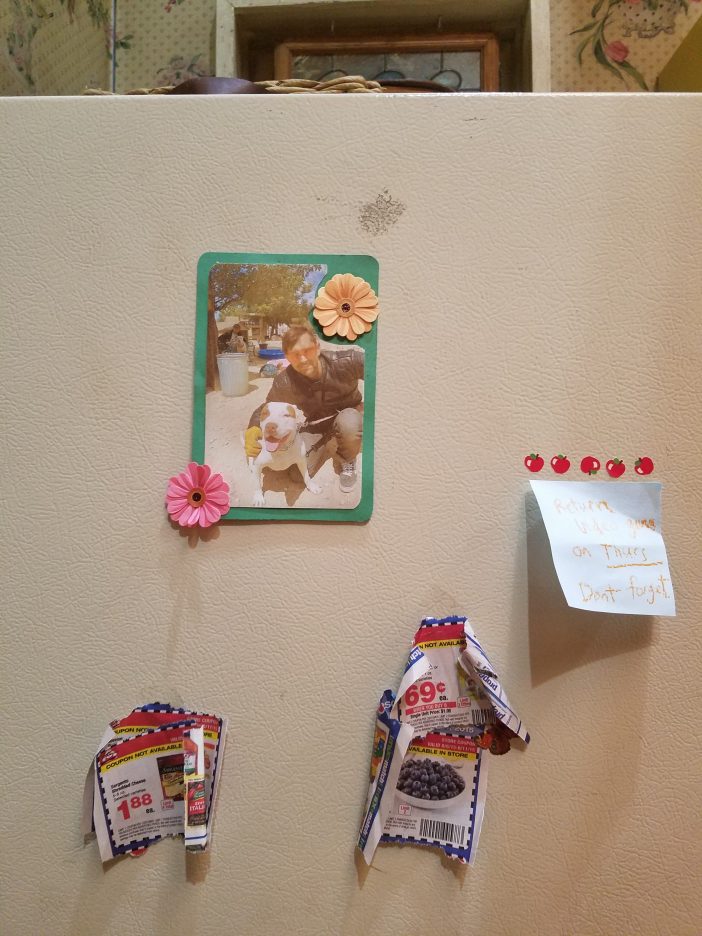 Tucked in a corner I saw this little heart wall hanging.  You know Maya was given this one holiday or birthday by one of the kids. 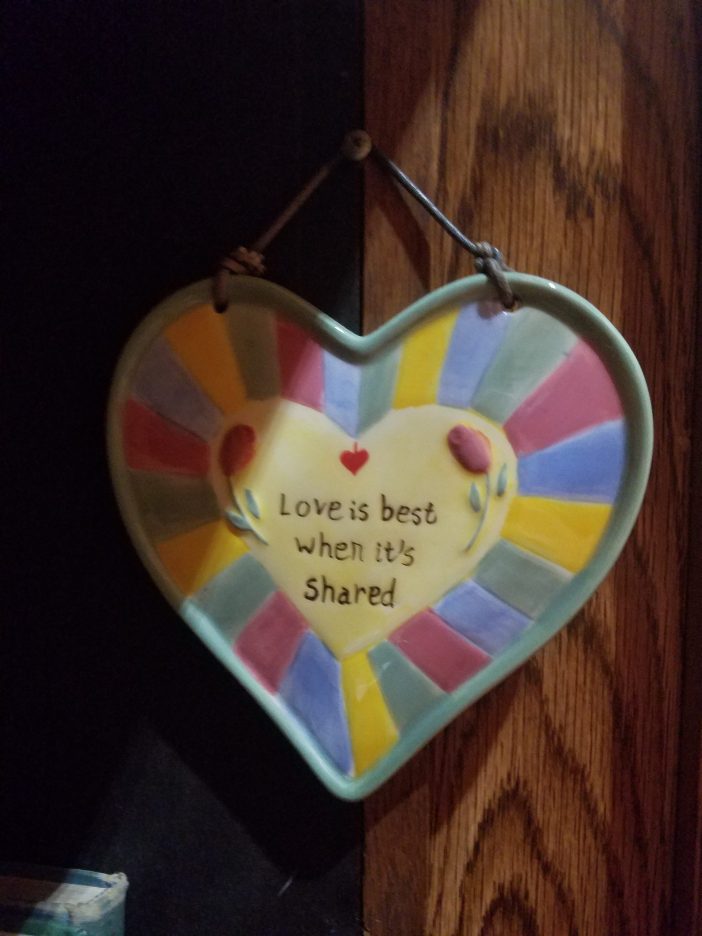 We also got a quick tour of the Speechless school set which is in the same building. 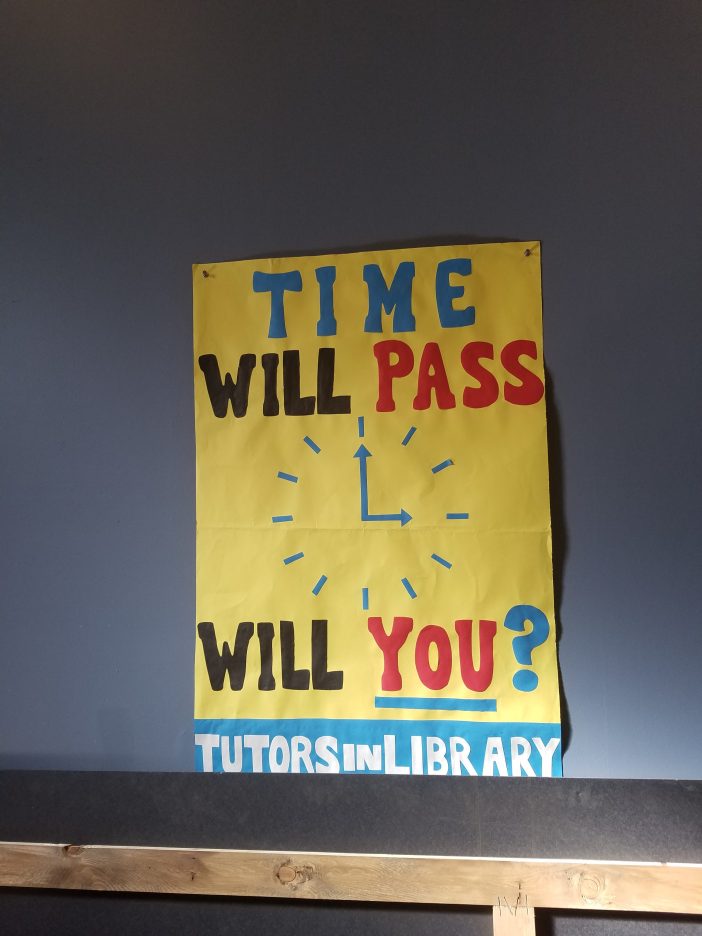 As we toured the school building the actors came in for a quick meet and greet. Minnie Driver who plays Maya and John Ross Bowie who plays Jimmy were the first to come and meet us.  Both were so happy to hear there were so many fans of the show in attendance.  We were asked if any of us were parents of kids with special needs and they appreciated hearing that this series resonates with people who live this life. 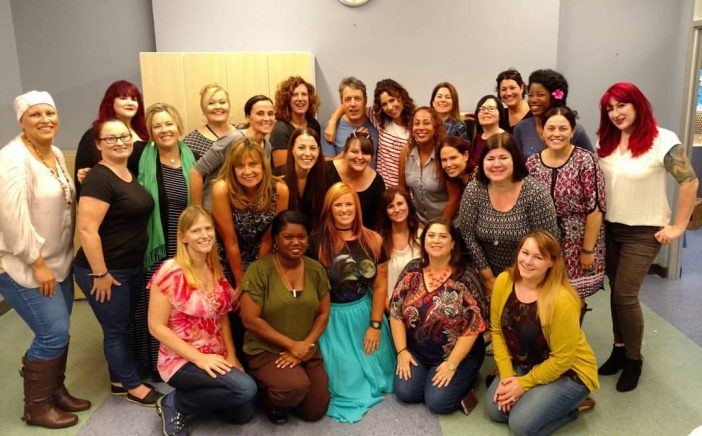 We chatted about the show, our own kids, and just what a show like Speechless means not only to families with kids that face obstacles, but just society in general. We all agreed that it is a conversation starter. 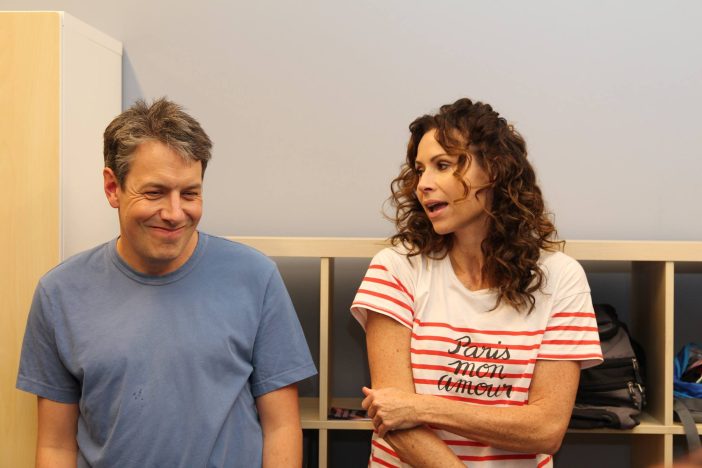 Ah, the siblings.  While much of the show focuses on J.J, his brother and sister are played by two very talented actors as well.  Kyla Kenedy and Mason Cook were kind enough to drop in and share a moment with us as well. 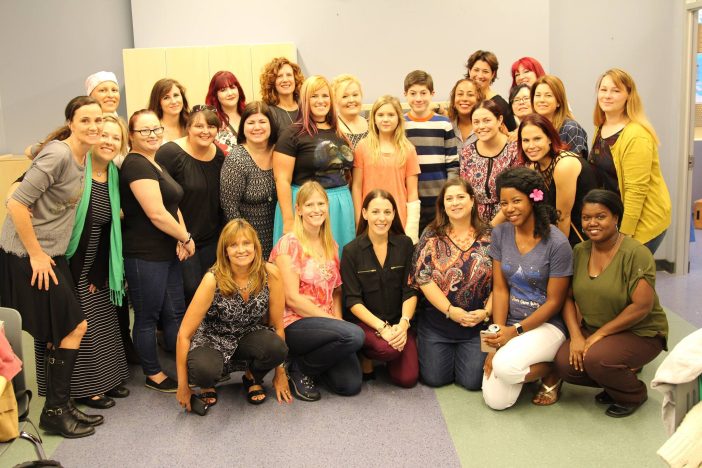 Bloggers love Kenneth!  I cannot imagine the show without him! 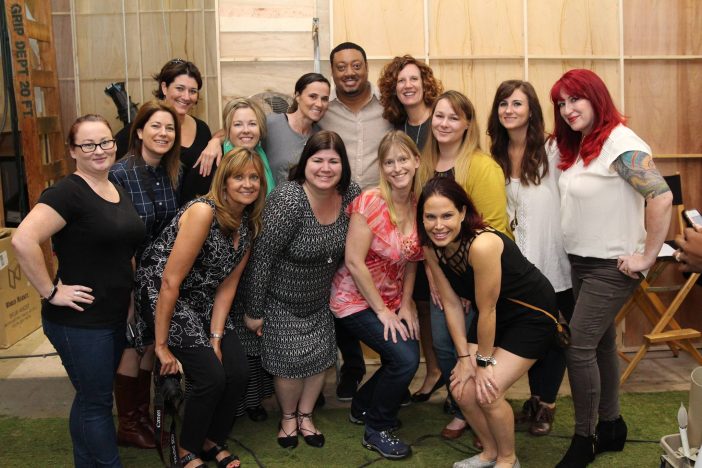 It was an honor to meet the whole cast, but Micah Fowler really blew me away. Scott Silveri said there was a wide search, but he knew Micah was J.J. from the moment he saw him.  Micah shared a video on Speechless’ Facebook page a while back where he shares that people underestimate him and it really spoke to me (and I am sure millions of others).  Micah plays one of the few characters on TV with a disability. Not only do very few characters have a disability, fewer still are they played by actors with a disability.

While Micah’s character J.J. does not speak, Micah does.  As we all moved in for this picture I said “I really love the show, thank you for coming out for a picture”. This is something most of us say to any actor we meet, but honestly I meant it a little more when I said it to Micah.  His show and his work encourages me in a way few other performances do.  In my experience, actors have always been gracious. A typical response is a quick head nod and “thank you for watching” and that is great.  Micah went the extra mile, he extended his hand to shake and told me thank you for watching, for coming, and for the support of the show.  I think because we are used to him being ‘speechless’ the room was silent as he spoke.  It was a simple exchange, but profound at the same time. 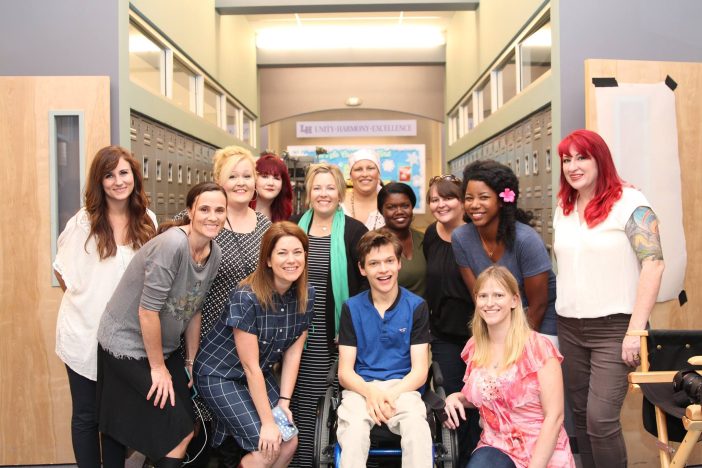 Speechless is on Wednesdays on ABC at 8:30/7:30c and I hope you will check it out!  Thank you to everyone at ABC who took the time to give us this exclusive look!