The Spongebob Musical : Live on Stage – on DVD

Disclosure: Highlights Along the Way is a participant in the Amazon Services LLC Associates Program, an affiliate advertising program designed to provide a means for sites to earn advertising fees by advertising and linking to amazon.com. We received a copy of Spongebob the Musical. All opinions are my own.
Share
Tweet
Pin
0 Shares

The Spongebob Musical : Live on Stage is now available for home viewing!  Our family loves musical theatre and animation more than anything! When a Broadway show based on a cartoon hits theatres we are sure to be in the audience.  We have currently been enjoying musicals at home while we continue to shelter in place.  Movie night this week was a preview of The Spongebob Musical from Nickelodeon.

If you are looking to introduce younger kids to theatre, I always suggest picking a show based on a cartoon they love.  While nothing truly replaces sitting in an audience and seeing the show live, it was so fun to bring the theatre into our living room.  Check out the information below and see a clip! 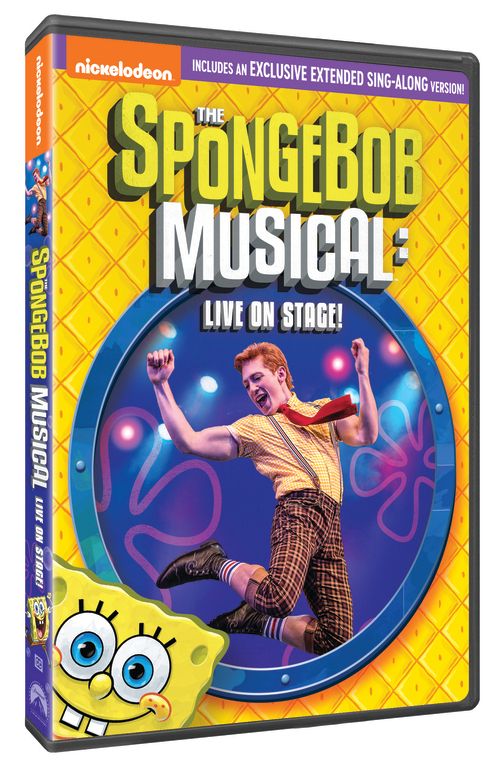 SpongeBob SquarePants and all of Bikini Bottom bring a party full of heart and humor in The SpongeBob Musical: Live on Stage!, arriving on DVD November 3, 2020 from Paramount Home Entertainment and Nickelodeon Home Entertainment.

SpongeBob and all of Bikini Bottom face catastrophe – until a most unexpected hero rises to take center stage to prove that the power of optimism really can save the world. This one-of-a-kind musical event boasts the full, extended-length broadcast of the hit Broadway musical, plus an exclusive sing-along version only available on this DVD! Also featuring a special guest appearance by voice actor Tom Kenny as ‘Patchy the Pirate,’ this is one under-the-sea spectacular that you don’t want to miss.

See a sneak peek of The SpongeBob Musical : Live on Stage! here

Tom Kenny as ‘Patchy the Pirate.’

The SpongeBob Musical: Live On Stage! is a musical production conceived and directed for the stage by Tina Landau, book by Kyle Jarrow, orchestrations, arrangements & music supervision by Tom Kitt, with choreography by Christopher Gattelli.

The SpongeBob Musical: Live on Stage! DVD is available on Prime for only $9.99!